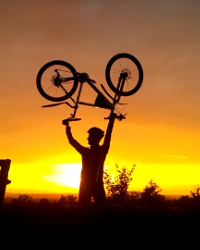 This is is 8th instance of my website since 1994, which – as its precessors- contains an “About” section that provides some brief information about myself. Starting from a fancy, more or less mature version in Version v1, each successor increased its focus on my profession and skill level – mainly because I doubted that my electronics experiments and telecommunication hacks in the 80s and 90s might be of for anybody.

A few years later, I think that this is a too much binary point of view, so I will attempt to go a little backwards.

Picturing a boy who:

…one might have a partial impression of me as a child.

I was working as a Lead Software Engineer, Architect and Project Manager in a mid-sized software company (now a part of Kistler Instrumente AG) in Aachen, which is focusing on industrial information technology, buzzworded Industry 4.0 and Internet of Things. My daily work includes all the tasks from Consulting, Requirements Engineering, Architecture Design and Review, Implementation, Testing and Project Management.

After that, I advanced to devolo in Aachen for a great time with the SmartHome and Operator Solutions team - right now I am working for a very cool company named codecentric in Solingen, a place most people will know because of the craftsmanship with regards to knives.

During my previous employments I was working in the digital audio and broadcasting, aswell in the textile and mobile communication industry. I am holding a degree in Computer Science and Electronics, when I am “away from keyboard” I enjoy cycling, martial arts, traveling, music and photography. A brief history of persistence in software engineering
January 14, 2015